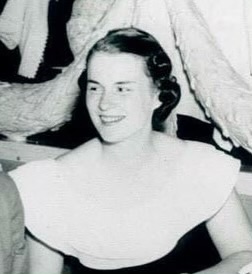 Maureen Therese Moynihan, 93, of Grosse Pointe Woods, passed away on September 10, 2022, of natural causes at The Rivers Grosse Pointe.

She was born on April 7, 1929, in Detroit, the daughter of the late James Sinnott, M.D. and the late Eleanor (nee: Nestor) Sinnott. She was baptized at St. Brigid's Catholic Church and attended Convent of the Sacred Heart, graduating from Visitation High School in 1947, where she was class valedictorian. She attended Henry Ford Hospital School of Nursing and worked for several years, primarily in polio wards, until she met and married William Michael Moynihan, II in 1953. They settled in Gesu Parish in Detroit and had five children: Lucy (Christine D'Arpa), Champaign, Illinois; the late William III (Elizabeth Brennan), Boise, Idaho; Joseph (Kay Douglas), Bloomfield Hills, Michigan; Mary (Robert Conway), Grosse Pointe, Michigan; Michael, San Diego, California.

After her children were grown, Maureen returned to nursing. She worked well into her 70s as a hospice nurse at the Hospice of Southeastern Michigan, being their second hire. She was a determined and devoted advocate for compassionate care for those facing the end of life. Her kind face and gentle manner were the last things hundreds of people saw and experienced before they passed.

She was a voracious reader, a talented gardener, and a superb cook. Maureen enjoyed watching her grandchildren's sporting events while praying the rosary to ensure no one got hurt. She had no patience for unkindness or pretense. As a child of the Great Depression, Maureen was careful, provident, and suspicious of monied showiness. She had a huge heart, a keen mind, and a wry sense of humor. She was quiet and not quick to judge.

A treasured memory of which she often spoke was a trip to Ireland with her daughter Mary, granddaughter Clare, and twin sister Rose. If there is an Irish section of Heaven, we are confident that Maureen is there reunited with her husband and all those that went before her.

She is survived by her four children, six grandchildren, four great grandchildren, and two nephews. Maureen was preceded in death by her parents, her husband, her son William III, her grandson William IV, her twin sister Rose Marie, and sister Margaret.

The family would like to thank the staff at The Rivers Grosse Pointe and Custom Hospice for their exceptional care and kindness. Their professionalism allowed Maureen to handle her end of life the way she saw fit.

A gathering will take place on Saturday, October 15 from 10 am until the time of her Funeral Mass at 10:30 am at St. Clare of Montefalco, 1401 Whittier Rd., Grosse Pointe Park 48230. Inurnment will take place at Holy Sepulchre Cemetery in Southfield.

In lieu of flowers, memorial contributions can be made to the University of Detroit Jesuit High School and Academy or St. Clare of Montefalco Catholic Grade School.

The attached photos are added to the memorial of Maureen T. Moynihan to help share their legacy.

Thank you for sharing your memory of Maureen