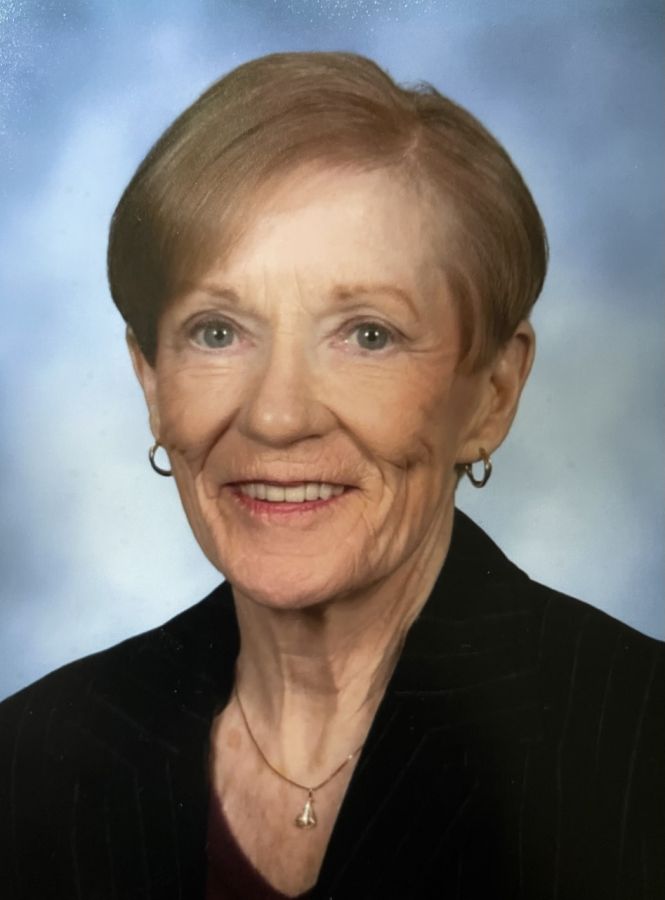 Roberta Madden Lady, 80, passed peacefully under the care of hospice and the extraordinary staff at Beaumont Hospital. Her husband of 49 years, Paul and four loving family members were with Roberta as her struggle ended. Granddaughter Brooke Lady sat with Grammy and other family members visited virtually during the preceding week.

Born to Robert Thomas Madden and Margaret Tierney Madden of Minneapolis, Roberta completed a family of two older brothers, Charles Thomas and John Robert. In the snowy city of Minneapolis, Roberta attended St. Lawrence Church and the associated elementary and middle school in SE Minneapolis, then St. Margaret's Academy for high school and The University of Minnesota. At St. Lawrence, she was drum majorette and the recital announcer (not performer!), consistent with her strong desire to lead and to influence peers. Always one to cherish her family and friends, Roberta kept up with close high school buddies - a.k.a. "The Bags from St. Mags" to her final days as well as regularly connecting with her family: sister-in-law Rosemary Kleeve Madden and several generations of loving, admiring nieces and nephews: Thomas H. Madden, Louise Young, Mike Madden, Chuck Madden, Julie Reeve, Wendy Brandt, Thomas K. Madden and Steve Madden, 19 grand-nieces and nephews, and 25 great grand nieces and nephews!

With a B.A. in English, Roberta selected Cincinnati, a smaller and warmer city, to launch her career. Beginning in 1963, she spent 14 years in the Market Research Department of Procter and Gamble, traveling country-wide and advancing to become Field Director. Her co-workers remember her for humor, diligence and dedication to advancing the professional possibilities and status of women.

1971 was a pivotal year, as Roberta met the man with whom she would spend the rest of her life: beloved Paul Lady. These two became one on April 14, 1973. Simultaneously, Roberta became a parent; she entered this role with sensitivity, warmth and enthusiasm: "You all were so cute" she recently quipped. Allison, Karen, James and Jennifer embraced Roberta and came to love and cherish her. In early years the family would spend weekends at Cowan Lake State Park in Ohio, racing Flying Juniors and camping. They made annual journeys to Torch Lake in northern Michigan to fish, sun bathe, sail and explore. The family of six also traveled by van to Key West via Disney World and to California and Mexico in marathon driving excursions.

In 1976, General Motors brought Paul to Detroit from Dayton; James and Karen eventually joined their household, both graduating from Grosse Pointe North. Roberta opened a Burke Marketing Research Office in 1977, serving the Michigan market which she directed for 16 years. During this period, Roberta earned an MBA from Wayne State University.

Once children were off to college, Roberta continued to learn, studying Pastoral Ministry at Sacred Heart Major Seminary, obtaining a basic undergraduate diploma in 2005. She was an active member of the Women's Prayer Group at St. Paul's on the Lake Church, extending her faith and her practice of community contribution. Roberta eventually joined the staff of St. Paul's as Director of RCIA, fostering the return of Catholics to their original faith and preparing new members for baptism. She was a volunteer at both Cottage and Bon Secours Hospitals contributing and serving in multiple leadership roles. From social justice for the underserved, support for the sick and elderly to the promotion of women's rights and opportunities, Roberta was a passionate and persistent advocate.

Starting in 2012, dementia plagued Roberta. With Paul, they navigated the twists and turns, trials and tribulations of decline. Roberta never lost the ability to recognize family. Sadly, early this May Covid entered their home and precipitated several infections, which seemed treatable but required hospitalization. On Thursday, June 2, the plan was moving to a rehabilitation facility. On Sunday, June 5, hospital staff realized her lung condition was declining. At noon, Roberta talked to Allison and believed she was getting better but by 5 pm, the typically articulate woman lost her voice. She passed six days later and we mourn the loss.

Mass for Roberta will be held at St. Paul's Catholic Church, 157 Lakeshore Road, Grosse Pointe Farms, on Monday, July 25. Visitation begins at 9:30 a.m., the Mass is at 10 a.m. Father Rich Bartoszek will conduct the service.

The attached photos are added to the memorial of Roberta Margaret Madden Lady to help share their legacy.

Thank you for sharing your memory of Roberta