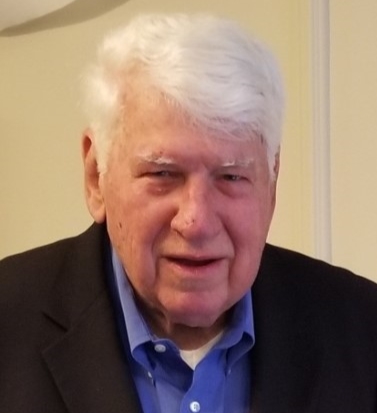 Edward Thomas Gramling passed away peacefully on January 20, 2022, after a short battle with cancer, with his family by his side. He was eighty-seven years old and is survived by his wife, Maureen, nine children, and thirty-six grandchildren. He had lived with his family in Grosse Pointe since 1983.

Ed was born on November 22, 1934, in New York City. After graduating from Mount Saint Michael Academy in Bronx, New York, Ed served the country he loved for four years in the United States Air Force. After being honorably discharged, he earned a bachelor's degree in physics from St. Peter's University and worked as an electrical engineer until his retirement in 2001.

Ed and Maureen were engaged shortly after meeting and falling in love on Labor Day Weekend 1959 in the Catskill Mountains, upstate New York, and married on October 7, 1961. Their first date was to see The Threepenny Opera, for which Ed did not purchase tickets in advance, so the couple had to sit separately - one of many stories that blessed their sixty years of beautiful marriage.

His life was primarily dedicated to and driven by his faith, his family, and his love of learning. He was a devoted Catholic who deeply loved the Mass and was a parishioner at St. Paul on the Lake. The Church was the source of his rich spiritual life and unwavering commitment to his family. He had a gentle and thoughtful way of sharing his faith among those in his family and beyond, which was manifest in his unending kindness, generosity, and understanding. Perhaps best epitomizing Ed's devotion to faith and family were the twenty-two years of daily walks he took with his granddaughter, Maggy, back and forth to Patterson Park, in almost any weather.

While the Church was his ultimate guide, Ed regularly encouraged others to search and inquire for themselves. He believed that education is a lifelong endeavor, and the books of philosophy, theology, history, and literature overflowing in his library and shared with his children and grandchildren were a critical and defining part of his life. A terrific listener, he guided his loved ones with wisdom, humor, kindness, empathy, and without judgment. He also had a very natural way of leading by example and displayed a genuine selflessness in his relationships with others.

Ed lived an inspiring life of faith and love. His greatest joy came from his vocation as a husband, father, and grandfather. He loved dancing with Maureen, watching his children and grandchildren play sports, and listening to his grandchildren's musical performances. He was a wonderful gift to many, and he will be dearly missed.

Ed was preceded in death by his parents, William and Dorothy, his brothers, William and Robert, and his daughter, Megan. He is survived by his wife, Maureen, daughters Erin Savinov (Victor), Jean Snyder (John), Mary Ellen Kaiser, and Alana Rossman (Mark), and sons Kevin (Laura), Edward (Bridget), Christopher (Sheila), Timothy (Elaine), and Sean (Erin), as well as thirty-six grandchildren.

Memorial Contributions in lieu of flowers may be sent to The Solanus Casey Center (1780 Mt. Elliot Street, Detroit, Michigan 48207) or The Phelan-McDermid Syndrome Foundation (https://secure.qgiv.com/for/2wfdne).

Dear Maureen, we are deeply saddened to learn of Ed’s passing. He certainly was the most wonderful neighbor and gentleman that anyone could ever know. Our sincere condolences to you, Mary, Alana, Erin and the rest of your family. Bill and Denise Bell

Dear Maureen and family, I carry many memories of my chats with Ed, and with you, Maureen, after Mass. It started with a hello, and blossomed over the years as Ed and I shared many moments, usually talking family. Ed has a way of giving you advice while just asking questions and being interested. I will continue to model his love for family and his understanding of fatherhood. My Dominican sons will remember Ed in a special way at Mass, as will I, and the rest of my family. Maureen, you remain in our thoughts and prayers, waiting to meet again. Mark VanBerkum and family.

We have many sorrows in our lifetime and losing Ed (Mr.Smiley) was certainly one of them. A bit of joy was gained by each of us when we met Ed. He was a wonderful, special person and we are saddened by our loss. This is heavens gain. God bless you, Ed. We miss you and love you. Dick Landuyt

May the angels wrap their arms their arms around you + your entire family, Alana. Condolences from my family to yours. Helena Thurber

Maureen and family,
Elaine forwarded us the obituary of Ed. It was very well done and we could see Ed in humbly going through life doing all those things mentioned. We were happy to meet all of you when you came to Corpus Christi for Elaine & Tim's wedding.
Ed was a very warm and kind person, sincerely interested in the well being of others. We enjoyed being in his company and he made all of us feel special.
God certainly has to be proud of Ed for all the wonderful things he did in his life.
All of you who knew Ed for many years know that he would have been a great companion to St. Paul because Ed had so many qualities that St. Paul wrote about especially that of being kind and considerate of others.
We were fortunate to meet him and share some time with him.
Maureen, we know that you miss him dearly, but be assured he is receiving his reward for being a very good person.
May God bless all of you. Our hearts go out to you and we send you our prayers.
Love, Lou and Art Kaler

On behalf of the Capuchin brothers I offer my deepest sympathies on the passing of Edward. It is truly humbling to receive memorial donations in honor of his life. Please be assured of the brother's prayers for the entire Gramling family during this great time of grief. May perpetual light shine upon Edward.

I am so sorry for your loss. My thoughts and prayers are with you and your family. Take Care.

The moment I met Mr. Gramling I could sense his extraordinary kindness, his spiritual devotion, his quiet wisdom, and his unending dedication and love for his beautiful family. You can see this same beautiful love and faith in his wife and children as well. You can see it in how they touch the lives of others - I am one of those lucky recipients. Whenever I was over at the family house in the Park, I always felt that the Gramlings were an extra special family - a warm house, a kind old dog, plenty of good food, and faith. There was always a sense of love and a feeling of welcome in the Gramling home. I felt like these wonderful traits were no doubt the signature of an honorable father and his amazing wife. And I saw first hand how Mr Gramling guided others in their faith and direction in life. And He taught his children to do the same - and they do! His life was a righteous example for so many of us - of a life lived well, with honor, grace, class, wisdom, and above all faith in God and the love of Jesus Christ. Godspeed Mr Gramling! May you rest in God's arms of love as you receive your reward!

I will miss seeing Grandpa Gramling out for a walk with Maggie in all kinds of weather. Such an inspirational man!

I can't honestly remember the exact moment that I met "Maryellens's " dad, .....because it really doesn't matter.....he was the kind of person that when you did meet, you knew right away that this is a good man. I am honored that I got to know him and his family through the friendship of Maryellen and my Michelle.....To have lived as long as he did, to raise this large loving family and to retain that smile and twinkle in his eye speaks volumes. His love for his family goes without saying...he was the rock that built the foundation for their future and the future of his grandchildren. Reading his obituary only strengthens my belief that when he arrived to meet his Father in heaven he was welcomed with a warm embrace and a 'well done my son, well done'....I

And that obituary makes you want to become a better person every day. Beautifully written and so very true. Thank you, Uncle Eddie, for being a great example in our world of what love of our faith, our family, and our education should mean to all of us. You always had a kind word and an amazing hug to share. You and aunt Maureen (and her Irish humor and infectious laugh), truly epitomized a wonderful marriage looks like. Thanks for all the many times you opened your house in Wilmington, Delaware when I was growing up and we had lots of fun cousin get togethers. May you rest in peace with your brothers, mother, and father. I am sure our good Lord greeted you with “well done, my good and faithful servant.” I love you Chrissy

The attached photos are added to the memorial of Edward Thomas Gramling to help share their legacy.

Thank you for sharing your memory of Edward