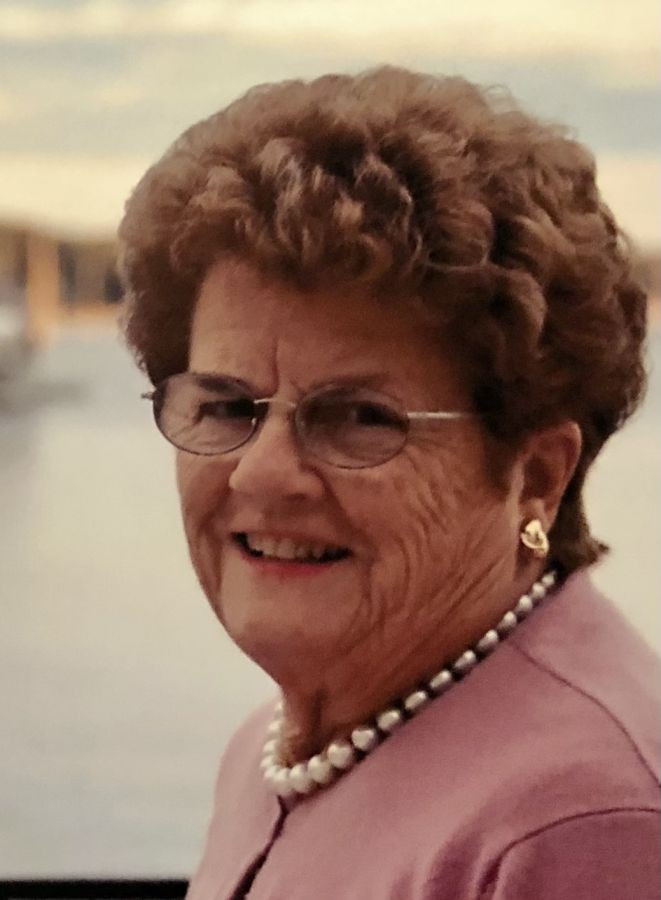 Harriet Howenstein Hull, 92, passed away peacefully on Friday, November 19 at Cranberry Park at Shorepointe Village in St. Clair Shores, MI. She was born on May 17, 1929 in Detroit. She was the firstborn of five children of Harry Baron and Eloise FitzSimons Howenstein. Harriet grew up in Grosse Pointe Farms and attended the Academy of the Sacred Heart in Grosse Pointe Farms from grade school through high school. In 1951 she graduated from Wheelock College in Brookline, Massachusetts with a B.A. in Early Childhood Education.

In June 1951, Harriet married Roger W. Hull, of Grosse Pointe. Together they raised five children. Harriet loved music and was a fine classical pianist. She enjoyed performing for her family and friends. She imbued her children with this same love. She was blessed with a beautiful voice and loved to share it. She hosted many neighborhood Christmas sing-alongs at her Grosse Pointe home.

She was also an accomplished sportswoman and enjoyed playing competitive tennis with her many friends. Later in life she took up golf, which provided her with great satisfaction. She was also an avid bridge player and a voracious reader.

Her favorite place in the world was the front porch and the beach at Birchgate, the family cottage in Roaring Brook (Harbor Springs, MI) She enjoyed nearly every summer of her 92 years at that beloved spot.

Harriet was a devout Roman Catholic and took great solace in her strong faith. She was a life-long member of St. Paul on the Lake Parish in Grosse Pointe Farms.

She was pre-deceased by her husband, Roger, in April 1981.

Harriet was active in her community through her membership in Sigma Gamma Association, the Morning Music Club, The Children of Mary and the Junior League of Detroit. She was a volunteer tutor at Detroit elementary schools. In later life, she spent her winter seasons at the John's Island Club in Vero Beach, FL., where she was a valued member of the John's Island Singers choral group.

Harriet was a Life member of the Country Club of Detroit, Grosse Pointe Farms, MI and a past member at John's Island Club, Vero Beach, FL and the Little Harbor Club in Harbor Springs, MI.

A funeral mass will be held on Friday, December 10 at 10:00am at St. Paul on the Lake church in Grosse Pointe Farms. Visitation at Verheyden Funeral Home on Thursday, December 9 from 4pm until 7pm.

On behalf of the Capuchin brothers I offer my deepest sympathies on the passing of Harriett. It is truly humbling to receive memorial donations in honor of her life. Please be assured of the brother's prayers for the entire Hull family during this great time of grief. May perpetual light shine upon Harriett.

The attached photos are added to the memorial of Harriet Howenstein Hull to help share their legacy.

Thank you for sharing your memory of Harriet