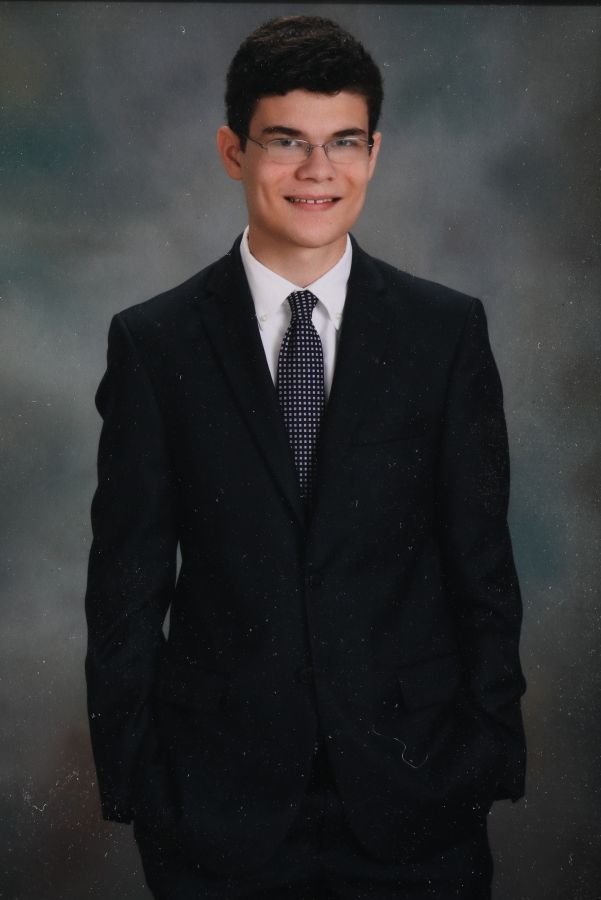 Harris Franklin Bunker, age 24, passed away Tuesday, Oct. 19, 2021, after complications from an extended illness at Henry Ford Hospital in Detroit. He had battled a rare blood disorder, aplastic anemia, and had received a stem cell transplant earlier in the year.
Harris was the loving son of Frank and Melissa Bunker of Grosse Pointe Woods. He was the dear brother of Amalia Bunker and Amanda Carroll. He also was the beloved grandson of Gladys Chipoco. He also is survived by many loving aunts, uncles, nephews, a niece, cousins, and friends he cherished as family.

Mr. Bunker was in the second year of his economics PhD program at the University of California - San Diego, where he was interested in public finance and applying information science to the study of economics. Versant in several computer languages, he had selected UCSD in order to study with experts in the fields of public finance and econometrics.

"Economics was a field of study filled with competing expert opinions, but data made economics into a science," Mr. Bunker would say. He wanted to advance the understanding of how best to best apply a nation's resources to achieve policy goals.
Mr. Bunker was a proud product of the Grosse Pointe Public Schools, starting with Mason Elementary and then Parcells Middle School. He graduated from GP North High School in 2015.

Mr. Bunker was a recipient of the Michigan State University Alumni Distinguished Scholar Award, a full, four-year, competitive scholarship for undergraduates. At MSU, he was a Social Science Scholar and an Economics Scholar. A proud Spartan, he closely followed football, basketball, and other Big 10 sports, but most of all, appreciated the camaraderie of students, faculty, and graduates.
Mr. Bunker graduated with two degrees from MSU in spring 2019, earning a Bachelor of Arts in Economics and a Bachelor of Science in Mathematics. As part of his work as an Economics Scholar, he enrolled in graduate-level classes while at MSU. He also studied as an undergraduate at the University of Zürich in Switzerland and had served as a summer research intern at Columbia University in New York City, where his work contributed to a published study, "The Effects of Head Start on Children and Parents' Health Outcomes."

Among his passions was Quiz Bowl, an academic competition for high school and college students. He served as captain of the team at GP North and at MSU. He continued to participate in competitions and to mentor students at UC San Diego. Mr. Bunker also was a valued member of the international Quiz Bowl community, writing and editing tournament question packets, moderating competitions, and recruiting new players. He competed in tournaments across the United States, Canada, and the United Kingdom.
Even during his 10-month struggle with aplastic anemia, Mr. Bunker thought of other people. He wanted everyone to become aware of rare blood illnesses and what they can do to help. He encouraged his peers and all young adults ages 18-35 to join BeTheMatch Registry, which matches donors and recipients for bone marrow and stem cell transplantation. The registration procedure consists of a simple cheek swab. He also asked members of the community to donate whole blood, platelets, and plasma to the American Red Cross.

Harris and the entire Bunker family are grateful to the tremendous care he received at Henry Ford Hospital.

Interment will be Monday, Nov. 1 at Mt. Elliott Cemetery in Detroit, a ceremony for immediate family.

In lieu of flowers, memorial contributions can be made to bethematch.org or the American Red Cross, redcross.org/donate. Those who knew Harris are invited to share a memory at Verheyden.org.

I knew Harris in high school through quiz bowl and some classes we had together. He was one of the very few people I have met throughout my life that followed MSU and college football as closely as I did. He was a very nice guy. He inspired me to register for Be the Match and I encourage anyone else to consider doing the same. Sending my sympathies and much love to the Bunker family.

I knew Harris during his time at MSU, specifically from the Econ Scholars program. It’s a program for exceptional students in economics, and Harris was a standout even among our top talent. What I remember most about Harris was his desire to reach his goals and his willingness to step outside his comfort zone to do so. One time he attended a PhD workshop I ran, in which only two other students attended. He came so prepared that he kept the hour-long event going almost single-handedly with his list of insightful questions.
I appreciated that Harris never let his ego get in the way of seeking and accepting advice. It led him to make great decisions, as he armed himself with the best information. He then paid it forward, always volunteering to help the next class of Econ Scholars.
I send my deepest condolences to his family. I hope, in time, it will comfort them to know that he will always be remembered for the positive impact he had on those who knew him.

I had the honor of meeting Harris when he started quizbowl his freshman year at GPN. Him and I bonded, as we both stayed heavily involved in quizbowl during college, despite being at different universities. In particular, we had dreams of creating a 'Michigan Quizbowl Alliance' which aimed to strengthen the high school quizbowl community in southeast Michigan. It was easy to see how passionate he was.

I want to give my deepest condolences to his family, he was a brilliant person and I was honored to know him.

We knew Harris when our boys were quite young but even then it was clear to see Harris' brilliance - he was gifted intellectually and had a very kind heart. We all felt Harris will be the one to make great contributions. I pray and believe in my heart his experience with this rare illness is going to make a mark on medical science in some way. Bless you all and prayers for your finding some peace.

I had the fortune of meeting Harris at Michigan State University, where I supervised his original, interesting, and collaborative research on capital income taxes. Week after week, I was amazed by the quantity and quality of his work and knowledge. He was a star, blessed with a brilliant intellect and passionately driven. But his character that was even more remarkable. Getting to know him made me more optimistic about the future. Respectful, honest, curious, and genuinely concerned about others, he was someone you could unconditionally trust and admire. A very bright light has gone out far too soon. I will always his honor his memory. My deepest condolences to his family.

I met the adorable, curly haired, sweet faced Harris at about the time he was turning one year old. His mother and I seemed to be leading parallel lives and my oldest boy was just a couple weeks younger than Harris. We rode sleds down the snowy front yard at my sister's house. I've kept up with his remarkable life journey through Facebook posts and mom talks. My heart is aching for my fellow mom. May God hold Harris and his loved ones in the palm of His hands and grant you peace.

Frank, Melissa and Molly…I wish you all peace and hope for your strength. Harris was a joy to be around and a good friend to Sal.

Harris was a good friend of mine in college quiz bowl and we shared hundreds of hours of cherished memories together. He was a brilliant, hilarious, and thoughtful person who made a lasting impression on me. He will be missed dearly by all who knew him. May he rest in peace. The Bunker family will be in my thoughts.

To the young boy who picked me a flower and made me dream of the day I'd have a boy as sweet as you. You will always be remembered. Love and strength to the Bunker family.

Hermano, Melissa, Molly and family. Thinking of you all during these sad days. My memories of Harris are plenty. He is a solid boy, and a dear friend to my son and my entire family. The Costa’s were fortunate to have him as part of our lives. Love Frank

My deepest sympathy and love to Missie, Frank, and Amalia. Harris will forever be in your hearts.

Although we lost touch a little after he graduated, Harris's drive and determination as a quiz bowl teammate and his dependability and good humor as a friend were unmatched among the people I've met. I'll miss him really dearly and always treasure the memories we had together. I hope the Bunker family can find some solace in the knowledge that to know Harris was to think well of him. Rest in peace, buddy.

You were a wonderful friend and I'll never forget the conversations we shared.

Hoping you are surrounded by love and comfort during this time. Harris’ brilliance and humor made him one of the most memorable people I’ve ever met. The entire Bunker family is in my thoughts.

I'm so sad to hear about Harris's passing. Wishing you strength peace in this difficult time.

Melissa Frank and Family. Keeping you close and in our prayers. Sending you peace and love as you lay Harris to rest.
Kenn and Judy Gafa

The attached photos are added to the memorial of Harris Franklin Bunker to help share their legacy.

Thank you for sharing your memory of Harris