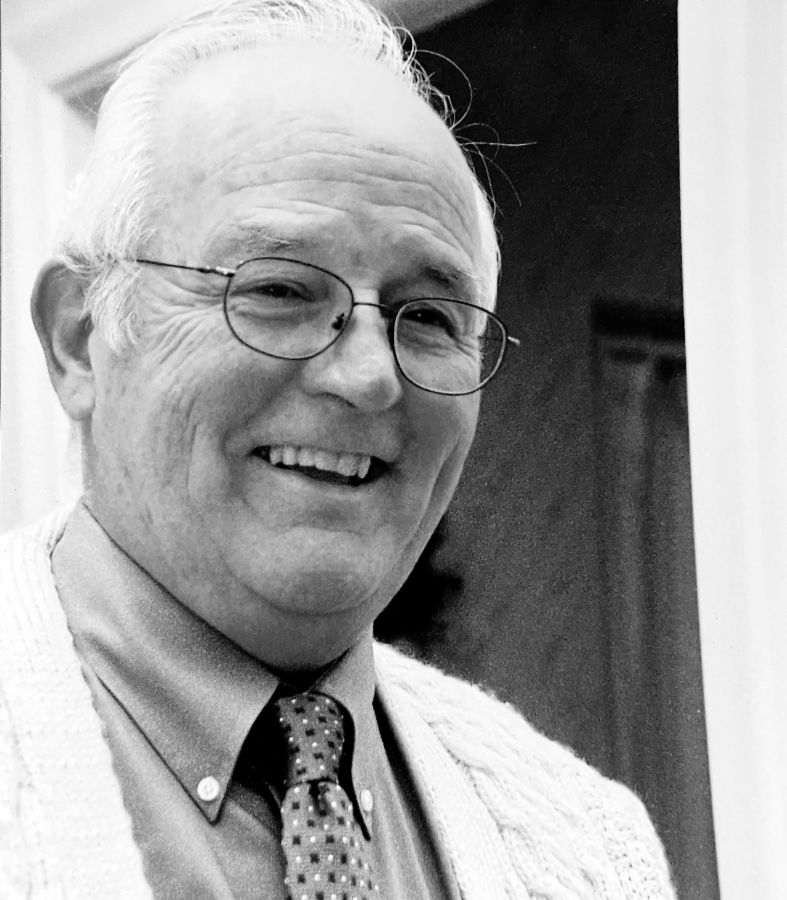 Wade, John M. Beloved by family and friends, John Wade passed away on Tuesday August 31, 2021. The youngest of 6 children, John was born in Grosse Pointe's Cottage Hospital on September 17, 1937 to Thomas and Pauline (Polly) Wade. He was a lifelong resident of Grosse Pointe, graduating from St. Paul's Catholic High School. He met his one true love, Grace Wade (Vickers), while working at Detroit Edison and they married on July 19, 1958 in Detroit. It was a romance that has lasted over 63 years. John will be loved and missed by Grace and their children, Patty Snider, John Wade (Maureen), Debbie Rude (Mike), Susan Crane (Dan), James Marcus-Wade (Laurie) and Julie Moesta (Bob), 17 grandchildren, and one great granddaughter as well as many friends and extended family. John was predeceased by his parents and 5 siblings Mary Martocci, Thomas Wade, Paula Abraham, Eleanor Keith and Margaret Wade.

He enjoyed singing and was a member of The Barbershop Harmony Society for over 60 years. John held many leadership roles as a member of the Grosse Pointe Chorus. He performed in state and national barbershop competitions and was well-known in the Detroit area for his frequent appearances as a member of the Silverdomes. John was also a long-standing member of the choir at St. Paul on the Lake Catholic Church.

Proud of his community, John served as a member of the Neighborhood Club Playground Development Committee. He coached youth sports and was an early volunteer for the Services For Older Citizens. Later, as a gate guard for the Parks Department in the City of Grosse Pointe, John found great joy in chatting with residents old and new while listening to Tiger baseball on the radio. He attended many University of Michigan football games, enjoyed playing golf and following the PGA Tour, and watching Detroit Red Wing hockey.

John had a great love of family. There was no greater joy for him than spending time with his beloved Grace, his children and grandchildren. His memory will be held deep in the hearts of those who loved him.

Visitation at Verheyden Funeral Home in Grosse Pointe will be held on Thursday, September 23, 2021 from 3-8 pm. A funeral mass for John will be held at noon on Friday, September 24, 2021 at St. Paul on the Lake Catholic Church. A commitment ceremony at the church's columbarium will immediately follow. Donations can be made to the American Kidney Fund 11921 Rockville Pike Suite 300, Rockville, MD 20852 or www.kidneyfund.org (www.kidneyfund.org).

I first met John when we were fathers of Little Leaguers
many, many years ago - I’m 90! My wife (a member of the choir for many years) and I,
members of St. Paul, crossed paths many times with John over the years. Although not close friends, we knew John as a very nice, very friendly man. Nancy and I send our condolences to Grace and all of the family. Tom Coles

I send my love and sympathy to John’s wife, Grace, and to his children, Patty, John, Debbie, Susan, Jim, and Julie; and to their spouses and to all those wonderful 17 grandchildren. John was such a lovely man. God bless your family as you say goodbye to him.

Dear Cousins,
I am sorry for your loss. Know that you all and Aunt Grace are in my prayers. I will have a Mass offered for the repose his soul.
May God comfort and send you His peace.

The attached photos are added to the memorial of John Martin Wade to help share their legacy.