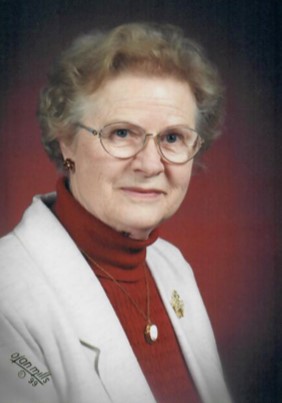 Helen Edmonds (nee Schmidt) was born at home and grew up in Hays, KS on a dairy and wheat farm operated by her large family. Helen descends from Volga Germans who settled Hays, KS in the 1870s on purchased land from the developer of the transcontinental railroad company.

Helen was the 9th child of 13 born to Paul and Catherine Schmidt. Helen was the last surviving child of her many siblings. Helen attended St Mary Catholic School.

Helen met her husband, Robert H. Edmonds, at Walker Army Base, Kansas. Helen moved to Detroit MI and took a job at Michigan Bell Telephone Co. in 1947. Helen and Robert were married in Wheeling, OH.

Helen adopted Robert's children from a previous marriage - Hugh Ann, Robert Cortez, and Charlotte plus they had 7 children of their own. Robert predeceased Helen in 1995.

Helen is survived by all of the children, both Robert's kids from an earlier marriage - Hugh Ann, Robert C. and Charlotte, and theirs together - Emma Lou, Roy, Mark, Theresa, Linda, Janet, and Karen.

Helen had a strong Catholic faith, belonged to St. Clare de Montefalco parish, was an Eucharistic minister, loved to walk to the library, read, and was an accomplished seamstress as well as a very competent family cook. Helen navigated the obstacles of life through the sheer force of her character drawing on her strong faith, iron will and self-discipline.

Helen had a well-developed sense of humor. Some of Helen's favorite words were "clicker" for remote, "whatchamajigger" or "whatchamacallit" for whatever device she didn't have a word for, and often referred to herself in the 3rd person singular ('a person just doesn't know where to turn...') when telling stories or anecdotes about herself.

A private memorial service is being planned.

The services for Helen have not yet been added. Please sign up below to be notified when the services are ready.

The attached photos are added to the memorial of Helen Mary Edmonds to help share their legacy.

Thank you for sharing your memory of Helen