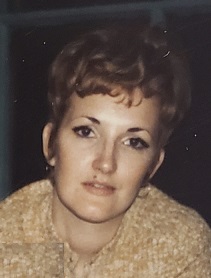 On Monday, April 26, 2021 God called his child Rema Sue Welch home to rest. She was born to the late Mr. Melvin H. Welch and Pauline Cletus Jones on July 24, 1938 in Lansing, Tennessee. She was one of nine children; one boy and eight girls.

Rema had a common law marriage to the late John Henry Jones and from that union four children were born; one boy and three girls. Duane Eric, Theresa Pauline, Melva Ann, and Carolyn Martine. Later she formed union with William Leo Underwood and of that union three children were born; one boy and two girls. Rebecca Lee, Michael Anthony, and Alanna Jo.

Dear Mother-In-Law Rema,
I will always cherish the wonderful memories of visiting your home in Detroit, MI where I first met you. You were always so kind to me and made sure I was okay. I can hear your voice asking me... "Roderick are you okay? Now you let me know if you need anything, Okay?" You are one of the nicest, caring and loving person I ever
met. It was such a pleasure being your son-in-law.

May You Rest In Peace. ⚘
Your Son-in-law Roderick ❤

Dear Grandma,
I will miss visiting you and I will never forget your kind words. I wish we had more time together, but I know that you are in a better place. May you rest in peace grandma.

May God comfort you and give you strength during this time of loss.

May God be with you and provide comfort, peace and cherished memories of your Mother! Rest in Heaven Ms. Rema Welch! You’ve left a great Legacy in your children. God Bless you all!! Nikki, Glenn & Grayson Combs

Dear Mommy,
I know that you are watching over us now. I miss you so much and I will cherish the memories we made together. It was very sad for me to watch you slip away. I always believed that we had so much more time together. I am so thankful for the last several years where we were able to create more memorable times. I enjoyed you sharing stories of your childhood, and exchanging memories of granny. Oh how we missed her Thanksgiving dinners. It helps me to know that during our talks that I shared with you just how much you taught me and how much you meant to me. My world will never be the same without you here. Goodbye mommy. You will always be in my heart.
I love you,
Bubba (your daughter Melva)

Dear Mother,
Although I know you are resting in a better place, my heart is broken. I miss you already, but the memories and values you have instilled in me will live in my heart forever. You have taught me so much, but most importantly you have taught me the Love of a Mother. You are and will always be a “Virtuous Woman” Proverbs 31:10

Who can find a virtuous woman? For her price is far above rubies. 11The heart of her husband doth safely trust in her, So that he shall have no need of spoil. 12She will do him good and not evil All the days of her life. 13She seeketh wool, and flax, And worketh willingly with her hands. 14She is like the merchants' ships; She bringeth her food from afar. 15She riseth also while it is yet night, And giveth meat to her household, And a portion to her maidens. 16She considereth a field, and buyeth it: With the fruit of her hands she planteth a vineyard. 17She girdeth her loins with strength, And strengtheneth her arms. 18She perceiveth that her merchandise is good: Her candle goeth not out by night. 19She layeth her hands to the spindle, And her hands hold the distaff. 20She stretcheth out her hand to the poor; Yea, she reacheth forth her hands to the needy. She is not afraid of the snow for her household: For all her household are clothed with scarlet. 22She maketh herself coverings of tapestry;Her clothing is silk and purple. 23Her husband is known in the gates, When he sitteth among the elders of the land. 24She maketh fine linen, and selleth it; And delivereth girdles unto the merchant. 25Strength and honour are her clothing; And she shall rejoice in time to come. 26She openeth her mouth with wisdom; And in her tongue is the law of kindness. 27She looketh well to the ways of her household, And eateth not the bread of idleness 28Her children arise up, and call her blessed; Her husband also, and he praiseth her. 29Many daughters have done virtuously, But thou excellest them all. 30Favour is deceitful, and beauty is vain: But a woman that feareth the LORD, she shall be praised. 31Give her of the fruit of her hands; And let her own works praise her in the gates.

Mother, may you rest in Heaven.
Love always, your Daughter Carolyn Martine

Aunt Sue, I’m so glad I got to see you during my visit to Michigan for Thanksgiving 2020. I was so happy you held my hand and and thanked me for visiting you. I will miss the long conversations we used to have on the phone, talking about the good ole days, like when the family all got together at grannies. You will be dearly missed. Look down on us from heaven and give a hug to grannie for all of us.

Grandma thank you for all you did for me. I will always remember you.

I am blessed to have you as my grandma. You were kind, patient, and caring. I will forever cherish memories of us watching “The price is right” screaming at the tv hoping we guessed correctly. As a kid I also looked forward to your sweet birthday cards and words of wisdom. I Attribute me having a old soul to you. The lessons you taught me I now share with my children. It’s true you knew a little something about every subject. Death is hard but I rejoice knowing you lived a full life. I love you grandma
Sincerely Setzuan aka your Ses

Mom, Mama, Mommy..... Rema Sue, 😪 I can't believe you are gone, you were my Mother and Father never skipping a beat . You did a great job raising SEVEN kids merely years apart. I only hope you really knew how much I adored and loved you. We had our differences as me being a rebellious teen, But you stayed by my side never leaving a call unanswered (here to the rescue again)I want you to know that I have always appreciated everything you sacrificed for me. So I thank you Mom. I find some comfort knowing that you are lifted upon the heavens reunited with love ones. 💘 Mom I will forever carry you in my heart ❤ I Love You ♾ Your Baby Girl 👶 Alanna Jo

As I reflect on my life, I am so proud to be the daughter of Rema. She was strong, courageous, intelligent and resourceful. Her attributes were best evidenced in her raising seven kids alone. Because of her, I can do anything. From cooking to laying tile and everything in between she taught me to give it a try. Mom, my heart aches but my spirit rejoices as I believe your job was well done, you finished the race and you have your crown. My tears are flowing but I have the precious memories of what a truly great mother you were. Your daughter, Theresa

Moms hold a special place in our hearts and Rema Sue, a.k.a my Mom, was held to the highest esteem and love amongst her children and other family. From my view, she was one of the most caring persons toward all people and taught me how to respect and move through life on this often chaotic earth. I was truly blessed to have Rema Sue as my mother!! Sharing the same birthdate, I always took that as my forever gift from her and was excited each year as we celebrated on whatever level our beginning of life. Now with Mom’s passing, I’m Deeply Sadden! But, as I have the inspiration from Rema Sue’s (my mom’s) teaching over a lifetime, I’m assured she will continue to look from the heavens with Pride and Joy bestowing upon us (children and other family) the drive to live life Meaningfully, Happy, and in Peace!
Mom, I love you, and know that you will always be the force that leads me to move forward. RIP, Your Son Duane.

To all my Dear Cousins. Your Mother meant alot in my Life as I grew up. I will never forget she took care of me and my Siblings while my Mother was in the Hospital have my Baby Sister Crystala. I will never forget driving in her giant station wagon. Those were the days enjoying quality time with my Cousins.🥰❤❤
My Aunt Rema Sue will forever be in my Heart ❤ and will never br forgotten. Love you all very much!! May God comfort you and give you all strength during this difficult time. God Bless 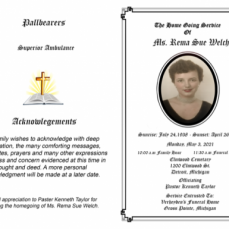 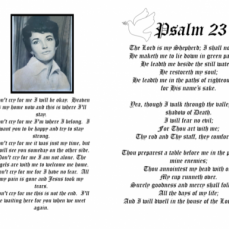 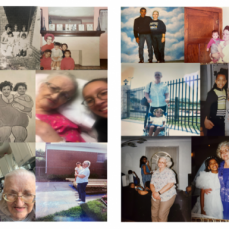 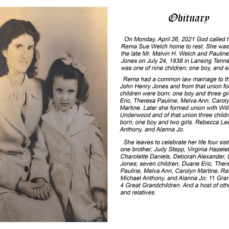 The attached photos are added to the memorial of Rema Sue Welch to help share their legacy.

Thank you for sharing your memory of Rema