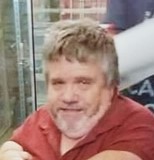 Richard Mark Wallace, 60, of Eastpointe, MI passed away on Friday, September 4th, 2020 at Ascension St. John Hospital in Detroit after a hard- fought battle with the Covid-19 virus.

Richard was born February 18, 1960 to the late Richard G and Joyce (Campbell) Wallace. He is survived by his brothers David, and Michael (Constance), his sister Jill (Kerry) Baker and his nieces Julie Baker, Amanda Austin and Courtney April. He was also a Great-Uncle to Zachary Baker and Madeline Prusinowski and many loving Cousins, neighbors and friends, who will miss his Giant personality more than words can say.

Richard never let his disability or size stop him from achieving anything in his life. He graduated from East Detroit High School, and then attended Automotive Design school. He began working as a contractor at Ford Motor Company. From there, he moved to General Motors Design Department where he would eventually retire. In his retirement, he opened a booth at Gibraltar Trade Center selling collectible diecast model cars that he also sold annually at the Detroit Autorama and The Woodward Dream Cruise.

Richard cared deeply for his family and friends, and he always had a joke or a prank up his sleeve. His laugh was infectious. He never knew a stranger!

Visitation will be Friday September 11, 2020 at Chas. Verheyden, Inc. in Clinton Township from 11am to 4pm. Richard wishes were to be cremated and laid to rest near his Mom & Dad at Cadillac East Cemetery in Clinton Twp., at a later date.

Memorial Contributions may be made to Leader Dogs For the Blind, Philanthropy Department, PO Box 5000, Rochester, MI 48308-5000


Due to Covid-19 mandates, face masks must be worn at all times in the building, and only 10 people will be permitted in the building at a time. No food or drink is allowed.

My heart hurt for the loss of Richard, 29 years he stood up in my wedding. I know years went bye , and i got to see him thought out the years ,not enoght. ,i will think and look at my wedding picture a little more ,you will be miss ,
Joy Nowicki

Sorry for your lost, I remember him as a young boy, living next door. always a joy.

I first met Rich at work 25 years ago, and ever since we have been good friends and had many adventures chasing after toy cars and buying automobilia of all sorts. Everyone admired Rich for his big heart and never letting his physical condition Interfere with his ambitions. My girls truly loved and admired him, we are going to miss him so much.
Autorama and toy shows will never be the same!!! Bill & Maria Truckey and kids; Rebecca, Teresa, Jake

Let me offer my heartfelt condolences to the Wallace family for your loss. Richard was a neighbor, a friend and such a part of my childhood that it's impossible to think of Lambrecht without him. I can only hope that those that loved him find peace in this difficult time and draw strength from the life he lived. With our deepest sympathies. Mac and Mary Beeker, Lake Leelanau, Michigan

The attached photos are added to the memorial of Richard M. Wallace to help share their legacy.