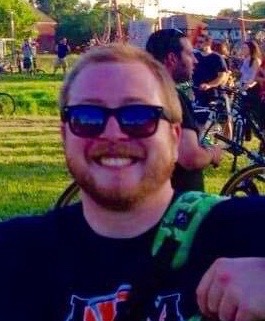 Collin (Cole) Emmett Powers, our beautiful son, brother, nephew, and cousin, died peacefully in his sleep on July 18, 2020. He was born April 2, 1988 to Brian and Julie (Eppinga) Powers in Detroit, Michigan. Cole was a wonderful son to his parents, and the best big brother his sister, Devin Powers, could ever hope to have.

Cole had countless friends, as well, who could turn to him for help and advice, which he gave without judgment. He was known for his wit and his wisdom, his charismatic personality, and his infectious smile.

Cole trained as a chef and worked in the restaurant industry for most of his adult life. He loved music, had a beautiful singing voice and traveled to several European countries on choir tours. He had an intuitive intelligence that was apparent to everyone he met. He was a film buff, an avid reader and could always be looked to for the most appropriate bon mot at happy occasions.

Although he was with us for only 32 years, Cole led a full and happy life in a short time. His warm and generous heart made the world a better place for those who were lucky enough to know him. His absence from our lives will be profound.

PLEASE NOTE CHANGE IN GATHERING INFORMATION: ANY PUBLIC GATHERING AND/OR SERVICES WILL TAKE PLACE AT A LATER DATE. THERE WILL NOT BE ANY PUBLIC VISITATION ON SATURDAY, JULY 25th AS PREVIOUSLY INDICATED.

In lieu of flowers, memorial contributions in Cole's name can be made to All About Animals Rescue, 23451 Pinewood Street, Warren, MI 48091

Please use this site to share a memory with Collin's family.

Arrangements have been entrusted to Chas. Verheyden Inc in Grosse Pointe Park, Michigan.

The services for Collin have not yet been added. Please sign up below to be notified when the services are ready.

The attached photos are added to the memorial of Collin Emmett Powers to help share their legacy.

Thank you for sharing your memory of Collin