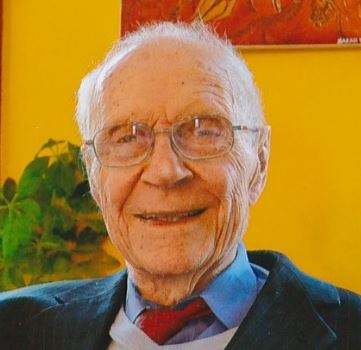 On June 17th, 2020 the kindest and gentlest of men Dr. Ignatios John Voudoukis of Grosse Pointe Farms passed away quite peacefully, surrounded by love at his home. He is survived by his daughter Chris Ann Roncone, son in law Nick, grandchildren Olivia and Willow, his sister Angela Papamichalakis (Panagioti), his wonderful nieces Christina Halkodemon (Yianni), Zina Samaklis (George), nephew Andreas Papamichalakis (Jenny), and great nieces and nephews in Greece.
Born July 8, 1927, in the village of Skalahori, Lesvos, Greece to Hristonimfi (Hatzilia) and John Voudoukis, his beloved and sweet sister Angela came along 2 years later.
A humble beginning in a tiny house with no electricity or running water. His family were farmers and cheesemakers. They worked hard to farm rocky land but had a beautiful view of the ocean.

He was not as it turns out born to farm but was legendary in his school district for having the highest grades ever. His friends and classmates called him "to Kefali" (the head) for his big brain and his classmates say his record is still not beat.
Growing up with the village churchyard fronting his house he could hear all of the services day and night from his window, although he never missed attending Sunday service in person for his mother would point to the artistic rendering of hell she posted above his bed to remind him what awaited him if he did. He loved the church as it was the sound of his childhood and knew all the liturgies and songs by heart.

When he wasn't working the farm or doing schoolwork he sat under the fig trees, eating figs and dreamed of being a philosopher but soon came the war and more serious matters convinced him to study medicine. His father sold the family cheese making business, took the money, and after an unsuccessful run at politics in Athens left for the US for a new life.

Food was scarce as Ignatios' island was under German occupation. His mother had wheat to make bread, and caught eels in the river. They faced many hardships and lost friends to starvation or illness, but he and his family prevailed.

He walked 52 kilometers round trip almost every week through the mountains to go to do his pre-med school in Mytilini, Lesvos and back home to his family. He then spent 10 years in medical school in Athens where he also served in the Greek Army. The army taught him to drive by giving him a jeep and pointing down the road. He promptly drove that jeep into a ditch and he famously forever after left the driving to his friends and family.
In 1955, a very sea sick Ignatios came to the New York harbor as an exchange student and completed his internship at Memorial Hospital in Albany, and his residency in medicine in Philadelphia at Hahnemann Medical College. He spent 2 miserable winters living in and taking all his meals in the hospital, not daring to go out in the unaccustomed bitter cold. During this time he sought out and found his father with the help of Greek communities on the East coast and found him just in time to save his life after a misdiagnosis left him in dire health until Ignatios came to his rescue. During his last year of residency, he was a founder of the Association of Hypertension and Cardiovascular Disease. Due to his interest and talent in both hypertension and cardiology, he was awarded a Fellowship in Cardiology and one in research, both at the University of Miami and Jackson Memorial Hospital where he spent a blissful year in the Florida heat and did an original study on blood thinners as blood clot thinning agents and was first to use enzymes to dissolve blood clots. This premier study appeared in the American Journal of Cardiology.

Poor Dr. Voudoukis' days in the warmth ended when he received a position as a Research Fellow in Cardiology and Renal Physiology at the Jewish Memorial Hospital of Montreal, Canada. A new level of cold, but things improved for him when he was invited to the wedding of a Greek acquaintance. The bride and her family were hoping to make a match for her sister, but across the table was the girls' best friend and the most beautiful woman that Ignatios had ever seen, Penny Christakos. He asked her to dance and ignored her refusals until even her friend begged her to relent. He whispered in her ear and sang her love songs and that was it. After a whirlwind and spicy romance by post as she was living in Toronto, they were married in 1962, had a brief stay in Montreal, and moved to Portland, Maine, for a position as a research associate at Maine Medical Hospital. Dr. Voudoukis was then recruited by Henry Ford Hospital in Detroit to become an attending physician on staff. While there he became a member of the Division of Hypertension doing research on the relationship of hypertension and arteriosclerosis. He developed the Ice Water test. He truly was a pioneer in the treatment of heart disease and assisted in establishing and later becoming President of the Hypertension Group of Southeastern Michigan which joined the University of Michigan and Henry Ford Hospital.

In 1967, in the middle of the Detroit uprising, Dr. Voudoukis opened his own practice on Woodward Ave and joined the DMC first with Hutzel Hospital as Chief of Hypertension, and then Harper Hospital. He then joined the Wayne State Medical School as Clinical Professor. This was also the year he adopted his daughter Chris Ann and made a home in Highland Park. His practice became the center of his universe. He took care of the patients and Penny took care of everything else. He loved his patients like they were his family, knew all of their family members, their stories. He and Penny threw them Birthday parties, went to their homes, went to their funerals. While not always the most organized practice there were sometimes long waits in the lobby as he spent too much time with so and so or let in too many people with no appointments, the lobby was often a festive atmosphere where new friendships were made, a couple of romances were born, and often the last patient before lunch was invited to join "Dr. V." to dine at the hospital. Many patients were too poor to pay their bills and he didn't care. They brought him cookies, vegetables, flowers whatever they had available. His patients came from all walks of life and he loved them all. He was so loved by his patients that some made donations of art or money to the hospital in his name. His character and position became so well known he was called upon for media opportunities with Sonny Elliot and Ernie Harwell and was frequently called upon to discuss hypertension on local radio and television. In the evolution of Cardio Medicine, Dr. William O' Neill, one time director of Cardiology at Henry Ford Hospital refers to Dr. Voudoukis as the pioneer who identified the clot dissolution and arteriosclerosis which led to angioplasties and stents to save lives. To that testimony, Dr. Voudoukis answers that he feels rewarded and fulfilled to assist in the well being of humanity.


In 1971 he and Penny decided to move to the suburbs so their daughter would have a yard and neighborhood. They found a home in Grosse Pointe Park. It was farther from the DMC but lucky for him there was no shortage of friends, patients, or hospital staff who loved him and offered him a ride home. At his home, you never knew who might turn up for dinner after someone offered to give him a ride, but he was never opposed to taking the bus. Penny and Chris Ann often met him at the local bus stop and walked home with him after a dinner of burgers and fries at the White Tower by the bus stop.
They also became quite involved in the local Greek community, and were forerunners in presenting Detroit Greek culture to local, national and world communities. They founded The Hellenic Society for the Performing Arts of which he was advisor, board member, and financier. This dance and cultural organization not only studied and recreated Greek costumes and dances of Greece but taught this to thousands of young people over the years. Who in turn performed in festivals, civic displays, and contests around the country. Many marriages and friendships came out of time spent performing in Hellenic Society and thousands of local Greeks fondly remember Dr. V from their time spent in the organization. Dr. V, Penny, and their friend Mary Ball were instrumental in establishing the first Riverfront Detroit Ethnic Festivals to help revitalize the city after the 1967 uprising.

While he will be remembered for these achievements, most important of all, he was the kindest father, Papou, and friend. He was the bringer of balloons, baklava, and grand entrances to every birthday of his granddaughters. He was the peacemaker in arguments between couples and friends. He was the man everyone knew incapable of saying a disparaging word of anyone. He never used a bad word, literally couldn't hurt a fly, always had a smile, and went out of his way to learn everything about everyone he spoke to. He never missed a party, never turned down an invite. He loved everyone equally and made everyone he talked to feel they just had a very meaningful conversation. Though he never did get to make his home somewhere warm, he warmed everyone around him with his sincerity and love. He will be sorely missed.

The attached photos are added to the memorial of Ignatios John Voudoukis, MD to help share their legacy.

Thank you for sharing your memory of Ignatios