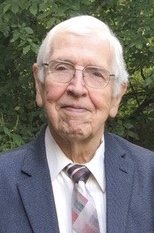 Richard J Michels age 88 of Warren, MI passed away May 15, 2020. Richard was born to Francis and Harry Michels on May 6, 1932. Dearest brother of Delores Pelzer, the late Harry, James, Thomas and Margaret Michels. Richard was predeceased in death by his beloved wife Bernice, son Thomas and granddaughter Elizabeth.

Mr. Michels graduated from St. Anthony High School in 1950, he attended Wayne State University before enlisting in the armed forces to serve in the Korean War. He enjoyed a 38 year career at General Motors in I.T. and Sales Administration. Richard married his sweetheart, Bernice on August 23, 1958. He is survived by his children Christopher (Pam) Michels, Lisa (Jim) Fouchia, Sheila (Greg) Cote', Andrea (Tony) Szalkowski) and daughter-in-law Rhonda Michels. Richard (Papa) was loved and admired by his grandchildren, Devin (Lenore), Brennan (Terri), Benjamin, Marie, Laura, Mark, Colin, Andrew, Mary, Anna and Daniel. He had a special bond with his nieces and nephews. Mr. Michels lived his life devoted to family and faith, he will be remembered as a wise, humorous, loving gentleman.

Mr. Michels will lie instate on Wednesday, May 20, 2020 at 9 am until the time of his Funeral Mass will be held at 10 am at St. Mary, Our Lady Queen of Families-St Clement Site in Centerline, MI. In lieu of flowers the family requests donations be made to either Holy Cross Brothers, Brother Roy Smith, CSC Brothers of Holy Cross, Midwest Province, P.O. Box 460, Notre Dame, IN 46556-0460 or Special Olympics Attn: Web Gifts, 1133 19th Street NW, 12th Floor Washington, DC 20036‐3604. Share a memory at verheyden.org

Chris, condolences to you and your entire family. Your father was always and in all ways so welcoming, friendly and supportive to me and toward the Brothers of Holy Cross. Your family always brought such a fun and festive attitude to any gathering. Be assured of our prayers, Bro. Roy Smith, C.S.C..

I loved being called “Petunia” by this always smiling, jovial uncle❤️ For my cousins and his grandchildren, may your memories bring smiles and not tears in the not-too-distant future and may your hearts heal knowing how very blessed we all were to have him in our lives. I pray for your peace and comfort in Jesus’ name, Amen.
Chris Foster


Uncle Mike will be greatly missed. It was always a joy to see him at family gatherings. When Ed wasn’t working and made it to some of the family gatherings, he always looked forward to seeing Uncle Mike and having an extensive conversation with him. Uncle Mike always made you feel special. I think the best way to describe Uncle Mike is that he was ‘THE PIED PIPER’ of our family. Uncle Mike was always surrounded by children. The kids flocked to him like a moth to a flame, and he was that flame.
I am so grateful to have had him as my uncle. The memories of him that I had as a child and all the memories of the generations that followed after will always pay tribute to this beautiful, kind, loving man that I am so very privileged to call uncle. “I LOVE YOU UNCLE MIKE. My thoughts and prayers go to his children & grand-children and also to the rest of my cousins. Uncle Mike was loved so very much. I pray for GOD’S peace and comfort to all my family in JESUS’ PRECIOUS NAME.
Love, Susie & Ed Mesner

We have all lost a very good friend. He was an immense help to many people who were fortunate to work with him at Chevrolet.

The services for Richard have not yet been added. Please sign up below to be notified when the services are ready.

The attached photos are added to the memorial of Richard Jerome Michels to help share their legacy.